French clerks have been working with the same software for 20 years, mainly because it allows them to do their job properly but also because they were very satisfied.In recent years, there have been many changes in laws and new technologies have evolved tremendously. This combination created the perfect opportunity to rise to the challenge of developing a new application. The project process is based on SAFe agile Frameword, sprints are 3 weeks long and releases are made up of 4 sprints.

For this project, the first step was to visit a law court. I followed several users over the course of a few days in their environment in order to understand their daily tasks, observe their sentiments with the current tool and identify some areas for improvement and development. It was also an opportunity for me to feed my curiosity and to learn more about legal proceedings. 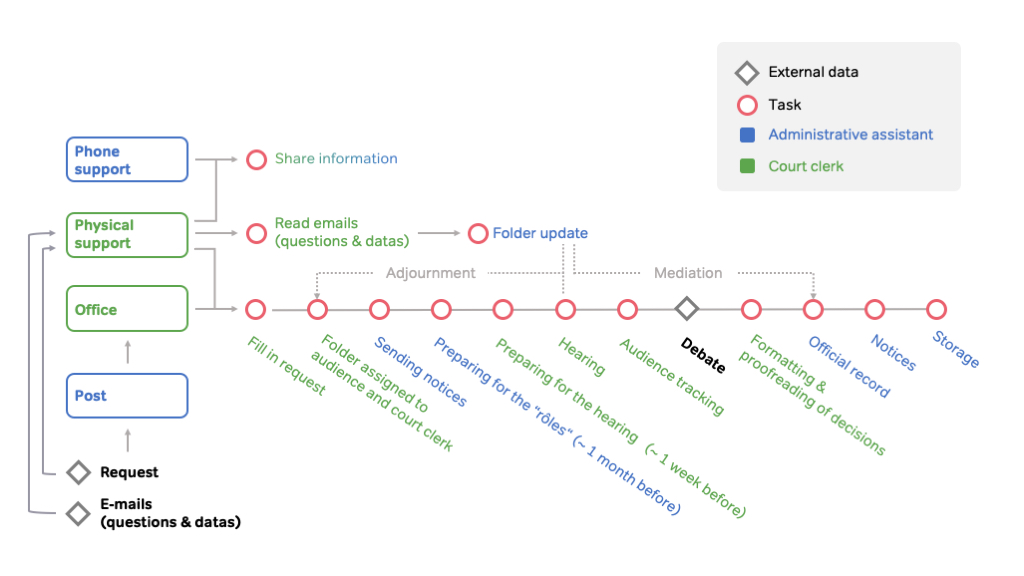 To work through complex features during the project, additional observations were made on specific processes.

Collaborate as a team

Creating a new feature begins by quickly drilling with the client team to narrow down multiple approaches. When one of the operative pathways materializes, a developer and a business analyst are added to the loop. Finally, after multiple iterations, when the functionality is stabilized, it is presented to the entire team to polish the final details.

To increase our productivity without putting too much weight on the development team, we created a design system, based on the material design system in place. Using the component library, allows us to get a better look and feel with greater accessibility and to reduce our developments.

During agile ceremonies and sprints, my role is to assist dev teams. I am available to answer questions, to explain interactions and verify the optimal integration of the HMI.

A session with 10 users from all jurisdictions is held at each end of the sprint to test new features as well as communicate with the project community. The results are then studied to trace the potential areas for improvement, and subsequently, they are prioritized.